LED Solar Lighting, are items that harness the power of the sun to light the world. Easy to install, energy efficient and environmental friendly, and can be used wherever there is sunlight.

What is LED Solar Lighting in the Philippines?

Using outdoor LED Solar Lighting in the Philippines will save your life when outdoor outlets are not available. Photovoltaic cells capture photons throughout the day to charge the batteries and then light up the lamp at night. Since solar lights are powered by the sun, they must be installed in an area that receives maximum sun—ideally eight or more hours a day.

Solar and LED lighting is the right match. They fit together and complement each other’s best features. The old standard of use of CFL or other types of lamps in solar lighting applications still involved a transformer of some kind to operate the light. This caused a power deficit, and the solar had to make up for it by being more prominent and providing more battery storage.

Since LEDs operate directly from DC power, there is no need for a transformer or extra power to compensate for the loss. This ensures that the solar system can function more effectively while providing improved illumination at a lower wattage.

The bright white LEDs have a better CRI (Color Rendition Index) and better visibility at night. As LEDs will balance the sun’s CRI, looking under a solar LED street light will not be much different from staring at the same thing during the day. It’s safer for protection because it puts less strain on the eye. Less strain means that people who have to work or travel at night are less tired.

Why Do You Need LED Solar Lighting in the Philippines?

LEDs have more excellent light quality and can balance any portion of the light spectrum from clear blue-white to soft, warm incandescent lamps.

They are also available in several colors for other uses such as garden, architectural, or mood lighting. When LEDs have improved, the vivid blue color that used to be seen in most LEDs has now been removed, and white light is left. Many LED fixtures also have a color spectrum of 3k to 5k, allowing for warmer light if needed.

LEDs use a fraction of the power needed by one incandescent lamp and a third less power than compact fluorescent lamps. Lower power usage produces improved lighting patterns for the same scale of the solar power plant, which reduces the expense due to the need to install fewer poles.

Solar lasts 25+ years, why do you want to go out a couple of years to change your lamp? Metal halide, LPS, HPS, and even small fluorescent lamps need to be modified very frequently. LEDs have 20+ years of life expectancy and make the solar lighting system virtually maintenance-free.

Solar produces electricity for applications without requiring any energy source other than the sun, and LEDs use that energy to provide illumination. How fine it is! LEDs also do not use asbestos or other toxic chemicals to make them safe to recycle before they finally go down.

Product Description of LED Solar Lighting in the Philippines

Select from available wattages between:

Product Benefits of LED Solar Lighting in the Philippines

Save energy and costs without sacrificing style with EcoShift’s wide selection of LED Solar Street Lights.

It has a life of over 50,000 hours
Its lights are several times brighter than its predecessor without the need to consume as much energy.

Product Application of LED Solar Lighting in the Philippines

Great for Solar Lighting System Project and Outdoor Lightings such as garden, highway, main roads and other industrial uses.

One of Ecoshift popular product line and most sold that is currently the new mainstream in Lighting Industry is UFO Solar Lights. Energy efficient and cost effective.

It’s used for Architectural lighting design, which helps the field of architecture, interior design, and electrical engineering concerned with the design of lighting systems, including natural light, electric light, or both, to serve human needs. 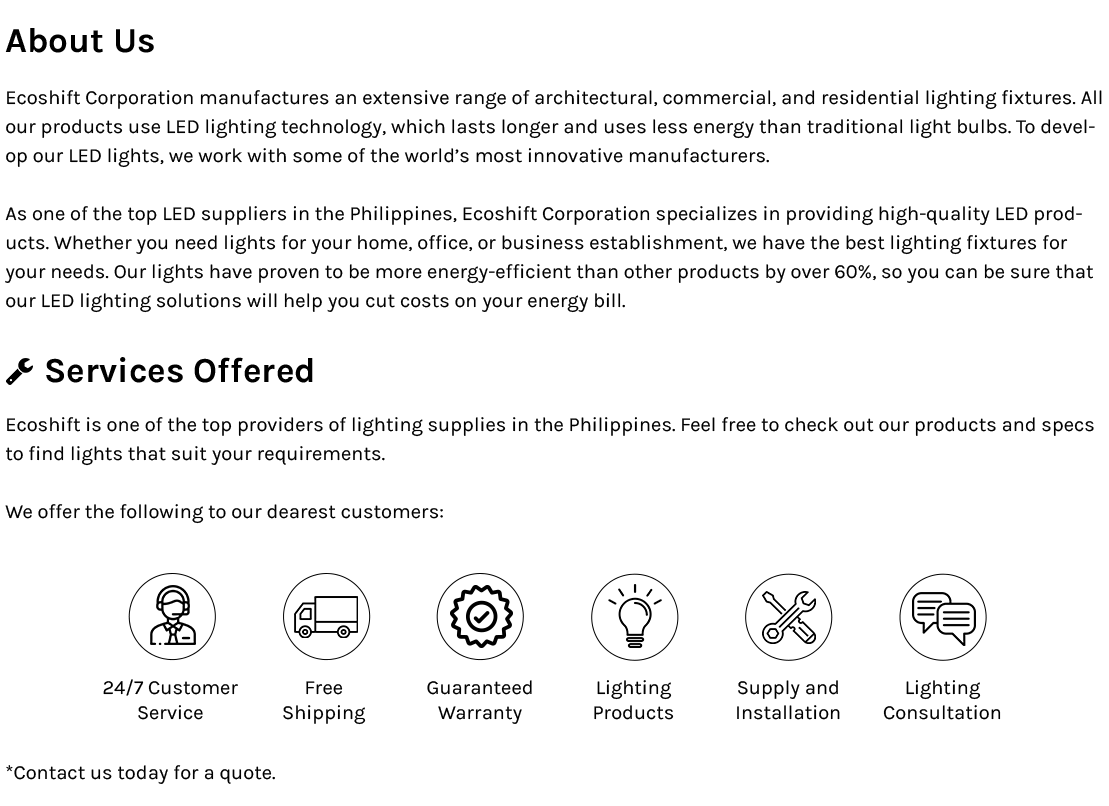 LED Solar Lighting, are items that harness the power of the sun to light the world. Easy to install, energy efficient and environmental friendly, and can be used wherever there is sunlight.

Regardless of which items you get, you can be sure that all our products are made with high-quality materials.

*Domestic delivery only within Davao City

Brand New Replacement Warranty if items are in correct packaging and in good condition and/or no damages are found.

We offer free installation services when you purchase our products or choose us as your official supplier. Installations are subject to approval.

Thank you! Your request has been received. Please expect a call or quotation within 30 minutes. If not, you may call: